Width: 3-8m can be customized

Thickness: 0.2mm-3mm can be customized;

The rough surface geomembrane is used as an impermeable base material. It is a geotechnical impermeable material processed by a special process formula through roll extrusion or blown film roughening treatment. The performance of the new material geomembrane is mainly isolation and impermeability. . At present, the geomembranes used in anti-seepage applications at home and abroad mainly include polyvinyl chloride (PVC), polyethylene (PE), EVA (ethylene/vinyl acetate copolymer), and ECB (ethylene vinyl acetate modified) is also designed for tunnel applications. Asphalt blend geomembrane), they are a kind of polymer chemical flexible material, with small specific gravity, strong extensibility, high adaptability to deformation, corrosion resistance, low temperature resistance and good frost resistance. Single-rough surface and double-rough surface geomembrane can increase the coefficient of friction with the contact surface and enhance the anti-slip function of the geomembrane. It is especially suitable for slopes, steep slopes and vertical seepage prevention, and improves engineering stability.

The thickness is 1.0～3.0mm, the width is 4～9m, and the length is according to engineering design or customer requirements.

In addition to excellent chemical resistance, mechanical properties, environmental stress cracking resistance, dimensional stability, heat aging resistance, and UV radiation resistance, HDPE pillar-point rough surface geomembrane has a large friction coefficient and anti-skid effect, which is very suitable Laying on the four peripheral slopes or steep slopes and vertical anti-seepage of the waste landfill facilitates the secondary laying of geotextiles and at the same time enhances the resistance to deformation of the membrane. It is generally used in projects where the surface of the membrane body of the slope needs to be covered with soil and a large friction coefficient is required. It can also be applied to road and railway tunnel anti-seepage and drainage projects. The performance index of this product produced by our company is twice higher than that of ordinary rough surface geomembrane, which improves engineering stability. 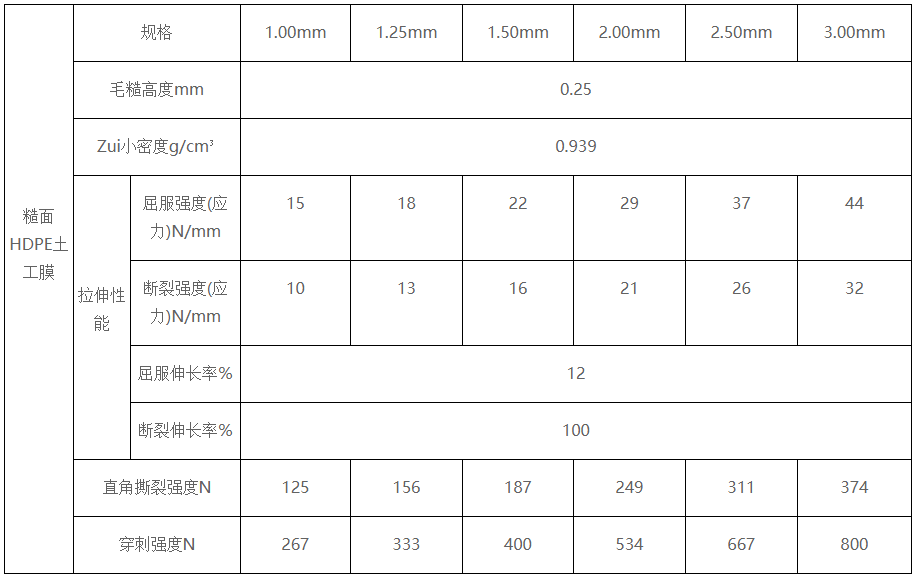 Get the latest price? We'll respond as soon as possible(within 12 hours)