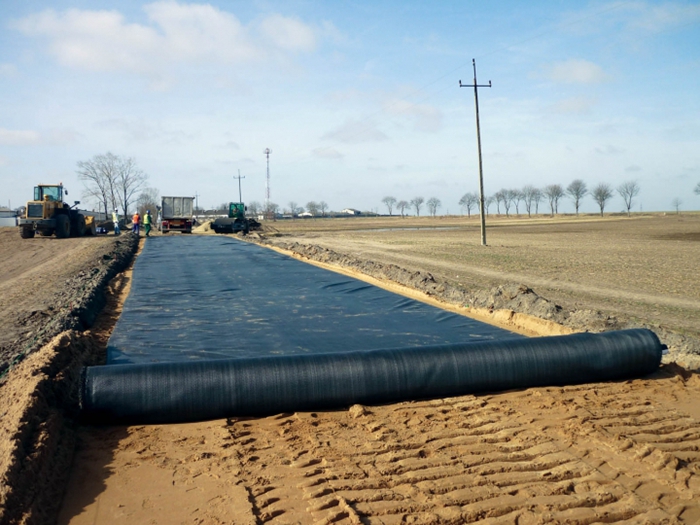 Physically damaged geotextile rolls must be repaired. Severely worn geotextiles cannot be used. Any geotextiles that come into contact with leaked chemical reagents are not allowed to be used in this project.

How to lay the geotextile:

1. For manual rolling, the surface of the cloth should be flat, and a proper deformation allowance should be reserved.

All stitching must be continuous (eg, point stitching is not allowed). Geotextiles must overlap at least 150mm before overlapping. The minimum stitching distance is at least 25mm from the selvedge (the exposed edge of the material).

Sewn geotextile seams at most include 1 row of wired lock chain seams. The thread used for stitching should be a resin material with a minimum tension exceeding 60N, and have chemical resistance and UV resistance equivalent to or exceeding that of geotextiles.

Any "missing stitches" in the sewn geotextile must be resewn in the affected area.

Appropriate measures must be taken to prevent soil, particulate matter or foreign matter from entering the geotextile layer after installation.

The lap of cloth can be divided into natural lap, seam or welding according to the terrain and function of use.

4. During the construction, the geotextile above the geomembrane adopts natural lap joint, and the geotextile on the upper layer of the geomembrane adopts seaming or hot air welding. Hot air welding is the preferred connection method of filament geotextiles, that is, use a hot air gun to instantly heat the connection of two pieces of cloth to a melting state, and immediately use a certain external force to firmly bond them together. . In the case of wet (rainy and snowy) weather where thermal bonding cannot be performed, another method for geotextiles - stitching method, is to use a special sewing machine for double-thread stitching, and use chemical UV-resistant sutures.

6. After the geotextile is laid, the geomembrane shall be laid after the approval of the on-site supervision engineer.

8. The numbers of the geotextiles of each layer are TN and BN.

3. All geotextiles must be pressed with sand bags. The sand bags will be used during the laying period and will be retained until the top layer of material is laid.

1. Grass-roots inspection: Check whether the grass-roots level is smooth and solid. If there is any foreign matter, it should be handled properly.

2. Trial laying: Determine the size of the geotextile according to the site conditions, and try laying it after cutting. The cutting size should be accurate.

3. Check whether the width of the salad is appropriate, the lap joint should be flat, and the tightness should be moderate.

4. Positioning: Use a hot air gun to bond the overlapping parts of the two geotextiles, and the distance between the bonding points should be appropriate.

5. The sutures should be straight and the stitches should be uniform when stitching the overlapping parts.

6. After sewing, check whether the geotextile is laid flat and whether there are defects.

7. If there is any unsatisfactory phenomenon, it should be repaired in time.

b. The worn geotextile must be repaired by laying and thermally connecting small pieces of geotextile, which are at least 200mm longer in all directions than the edge of the defect. The thermal connection must be strictly controlled to ensure that the geotextile patch and the geotextile are tightly bonded without damage to the geotextile.

c. Before the end of each day's laying, conduct a visual inspection on the surface of all the geotextiles laid on the day to confirm that all damaged places have been marked and repaired immediately, and make sure that the laying surface is free from foreign substances that may cause damage, such as fine needles, small iron Nail etc.

d. The following technical requirements should be met when the geotextile is damaged and repaired:

e. The patch material used to fill holes or cracks should be the same as the geotextile.

f. The patch should extend at least 30 cm beyond the damaged geotextile.

i. For the safety of geotextile materials, the packaging film should be opened before laying geotextiles, that is, one roll is laid and one roll is opened. And check the appearance quality.

j. Special proposal: After the geotextile arrives at the site, the acceptance and visa verification should be carried out in time.

Precautions for installation and construction of geotextiles:

1. The geotextile can only be cut with a geotextile knife (hook knife). If it is cut in the field, special protection measures must be taken for other materials to prevent unnecessary damage to the geotextile due to cutting;

2. When laying geotextiles, all necessary measures must be taken to prevent damage to the material below;

4. After installation, conduct visual inspection on all geotextile surfaces to determine all damaged landowners, mark and repair them, and make sure that there are no foreign substances that can cause damage on the paved surface, such as broken needles and other foreign objects;

5. The connection of geotextiles must follow the following regulations: under normal circumstances, there should be no horizontal connection on the slope (the connection must not intersect with the contour of the slope), except for the repaired place.

7. Pay special attention to the stitching during installation to ensure that no dirt or gravel from the gravel cover enters the middle of the geotextile.

1. At the suture junction, it is necessary to re-suture and repair, and make sure that the end of the skip stitch has been re-sutured.

2. In all areas, except for rock slopes, leaks or torn parts must be repaired and stitched with geotextile patches of the same material.

3. At the bottom of the landfill, if the length of the crack exceeds 10% of the width of the coil, the damaged part must be cut off, and then the two parts of the geotextile are connected.

Previous： Fiberglass Geogrid-Application in Urban Roads
Next： The Difference Between Gecell and Geogrid
Get the latest price? We'll respond as soon as possible(within 12 hours)